Jasmine has always loved big families, and wanted to have as many kids as possible. Although she and her husband, James, had no family history of twins, she regularly asked God to give her twins. They even asked family members to pray for it too. “My mom, at first, was hesitant, because she knew that having twins could often lead to a high-risk pregnancy. I told her to have faith in God, because he is all-powerful,” Jasmine says.

When Jasmine found out she was pregnant, she went to her first ultrasound thinking about how great it would be if they discovered she had twins. “When the technician said baby number one, and baby number two, I was so surprised and happy. I almost wanted to cry. I immediately told my husband, and he thought I was joking,” she says. Jasmine’s family was also surprised, and believed it was an answer to prayer. It would be a while before they fully realized just how important prayer would be throughout the pregnancy.

For the next few weeks, Jasmine and James were filled with joy over the news. However, after another ultrasound at 16 weeks, doctors discovered there may be some issues with one of the babies. “I knew it wasn’t good, but I wasn’t too worried until I researched online,” she says. At the next ultrasound, her doctor shared that the smaller twin’s growth was being restricted, and the baby could possibly die at any time. There was also the risk of the other baby, and Jasmine herself, being affected.

Jasmine was expecting the doctors to give her treatment options, but the only surgeries available were very high risk. Instead, one doctor recommended she abort the smaller baby. The doctors had given them the weekend to make a decision. “Words cannot express how much pain these options brought. James and I were terrified. Every time I looked at the ultrasound screen, the small baby was always active and moving around. It was very hard to believe that he was not doing well. And the option to give him up did not sit well with me. I started to have nightmares, waking up in the middle of the night, feeling nothing but panic,” she says.

How can I keep my babies alive if even I could die at any time?

After sharing with several Christian friends, they knew the right decision was to completely trust God in the outcome of the pregnancy. Jasmine and James didn’t feel that they had the authority to make the decision: “When I was thinking about the options I was given, I started to realize how fragile humans are. I was trying to make a decision over life and death, but I felt so little control. How can I keep my babies alive if even I could die at any time? God is in control over the babies’ lives, and my life – not me,” she says.

By knowing and accepting that God was the one in charge, Jasmine began to experience a strong and powerful sense of peace. Prayer became very important to her: “Although God gave me peace, I still needed to pray a lot. Otherwise fear would come back again. When I felt panic, I would call Christian friends to pray together.”

Jasmine started contacting Christian friends and churches to spread the request for healing prayer. She would go to the prayer room each week after the service at Village Surrey. A group of elders also prayed with her, and anointed her with oil. She says, “It really helped, knowing that so many people were praying and thinking about me so that I could be strong.” Jasmine trusted that God would be with her family no matter what. “God taught me to be humble because he’s in control and we are fragile. We are not as powerful we think we are. When I realized there was nothing the doctors could do to help me, I realized that God is God. He taught me to be humble and obedient,” she says.

At 30 weeks into the pregnancy, the situation started to get better. Each new ultrasound showed the small baby consistently getting bigger. Jasmine felt it was a sign of answered prayer. “The doctors said it was supposed to get worse, but my situation was behaving in reverse; it was getting better. My doctor was surprised by how the small baby’s blood flow had improved; they could not explain it. God started to work, and that encouraged me,” she says. At 34 weeks, they decided they shouldn’t wait any longer, and that the babies would survive. “Before I was about to enter the surgery room, James and I prayed once more for the delivery. Tears of joy rolled down from my eyes,” Jasmine says. 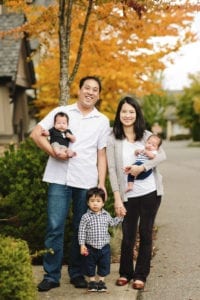 On July 9, 2019, two healthy baby boys were born: Sidney and Connor. The doctors confirmed that the complication which could have caused brain damage did not happen; the babies were healthy. A couple months later, their family is now happily settled at home. Jasmine says that while it is very busy at their house, the twins are eating and sleeping well.

Back To All Stories